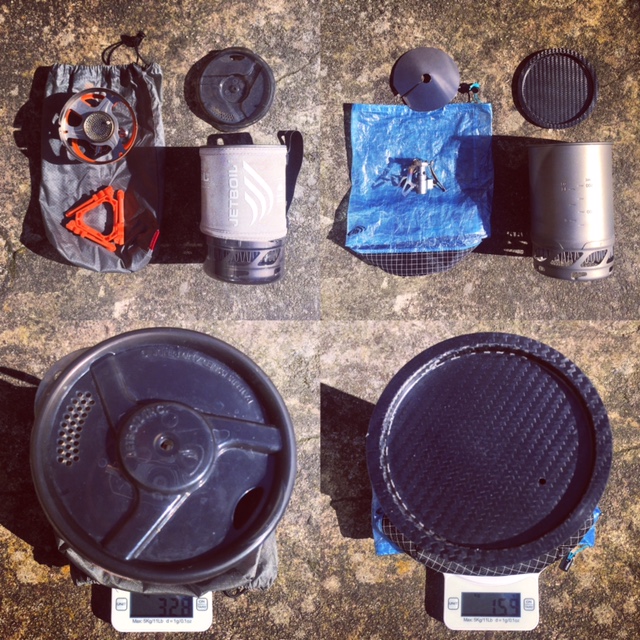 I was stuck at home this morning waiting around for a parcel delivery so I decided to have a play with my Jetboil setup.

A while ago I picked up one of the BRS-3000T kits from Ruta Locura. I've used it a few times and it boils water quickly just like the original burner so I didn't really think anymore about it. The kit includes a carbon fiber lid, a custom (bent) BRS-3000T stove and a Ti foil heat shield which doubles as a cover for the bottom of the jetboil. The heat shield allows you to store the BRS-3000T inside the bottom of the pot amongst the flux fins. Since ordering mine the kit has been updated to include a Ti foil ring that acts as a small spacer between the stand and the flux ring.

The original setup including the cart stand comes in at 328g sans gas, this is what I've typically carried on past trips. Using the lightweight setup assumes you're already carrying some sort of ignition and that you have something in your kit you can handle a hot pot with but the lightweight setup drops the weight to 159g, roughly a 50% reduction. OK yeah, you could lose the stand, cosy, cup etc from the original setup but swapping out the burner would still provide a healthy weight saving. I'm not really one for measuring boil times, partly because of all the variables but mainly because to me, it doesn't really matter that much if one system boils water 20 seconds faster than another. I did wonder how much difference there would be in efficiency so with some time to kill today I dug both setups out of the cupboard and made myself a few cups of coffee.

Both boils were done outside without any kind of windshield using 500ml of cold water straight from the tap. I've no idea what the ambient air temperature was or the start temperature of the water but the original setup took 1:55 to come to a rolling boil, using 6g of gas to get there. The lightweight setup took 2:05 and used 7g. Not much in it really.

As I say this was toying around in the backyard and isn't supposed to be any kind of scientific test but I thought the results might be of interest to others.

I've no affiliations etc with Ruta Locura and the items in this post were bought with my own hard earned pennies.
Posted by OutdoorsMH