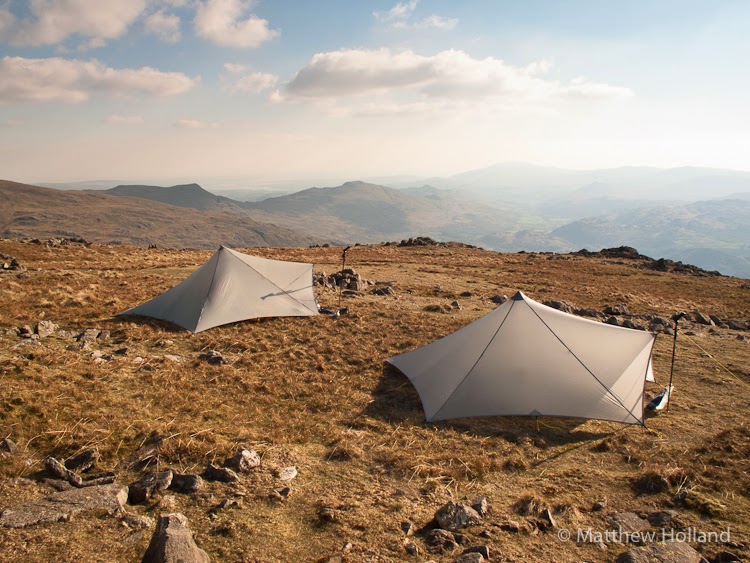 Last weekend I managed to get to the Lakes for what will probably be my last outing before the TGO in May. Peter (@munro277) was free and a plan was hatched to have 2 nights around the Southern Fells.

With it being the bank holiday weekend I wasn't really sure what to expect heading over on the Saturday morning. I hoped most people had done their travelling on the Friday and the roads would be fairly quiet but part of me suspected the roads would still be fairly busy so I set my alarm early hoping to miss any of the bank holiday stragglers. I was either too early or everyone was already enjoying their bank holiday weekend as the roads were the quietest I've ever seen them, I think the only person who was enjoying the quiet roads more than me was the guy in the white Lambo that absolutely flew past me outside Kendal.

Arriving just outside Torver far too early to meet Peter I had a short wander and then found somewhere to devour some bacon and have a cuppa whilst sat in the sun. 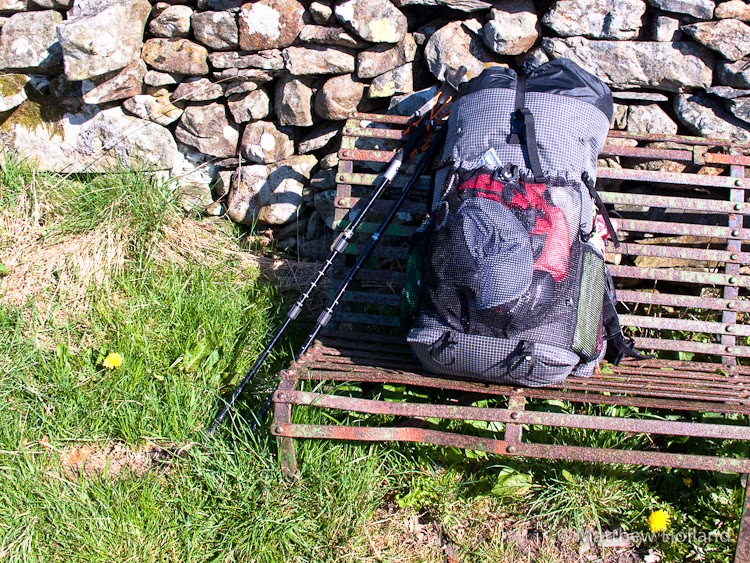 After I'd had a good feed and made my way back to the car it wasn't long before Peter and Oscar arrived and we set off towards the hills. 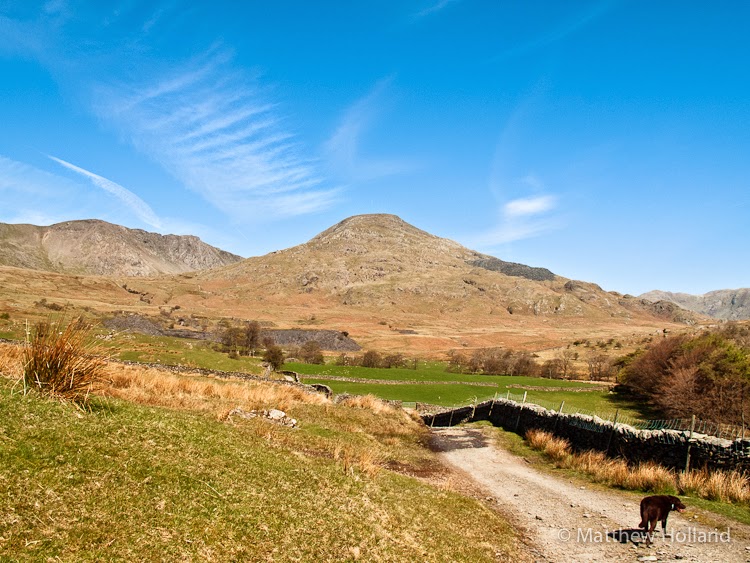 It was a warm start to the day with barely a cloud in the sky as we left the car and made our way up to the Walna Scar Road so it was no surprise to see quite a few others out making the most of the fine weather. We made our way up the Walna Scar Road before turning South West to take in White Maiden and White Pike. We had a short break on White Maiden relaxing in the sunshine whilst Peter had some breakfast. 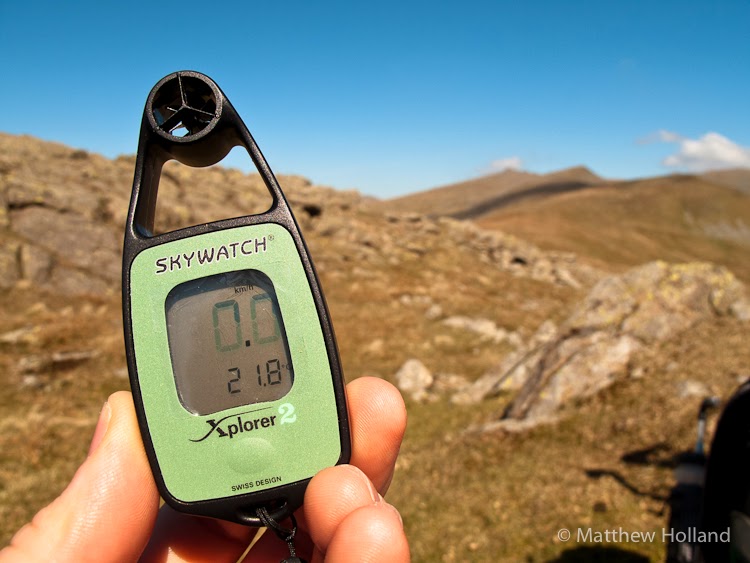 From here we followed the well trodden path along to Brown Pike, Buck Pike and Dow Crag before dropping down slightly to Goat's Hawse where we had another quick stop.

The view from Dow Crag 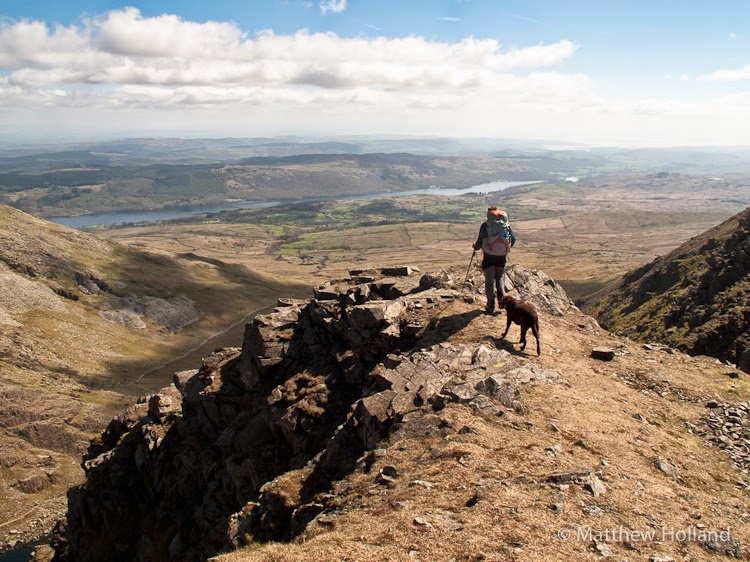 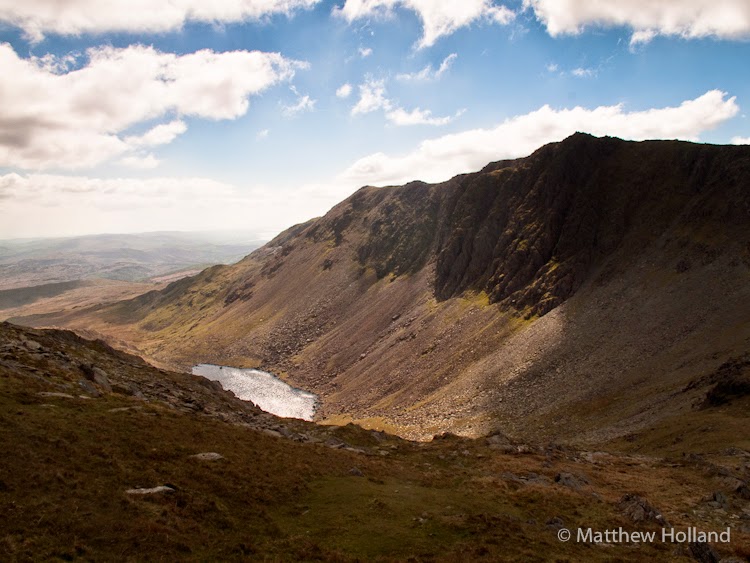 We were in no rush so had a bit of a laze in the sun before making our way up Coniston Old Man. As expected the summit was a busy place so we didn't hang around for long, I took a few photo's and Peter sent a few tweets before heading off in the direction of Brim Fell. 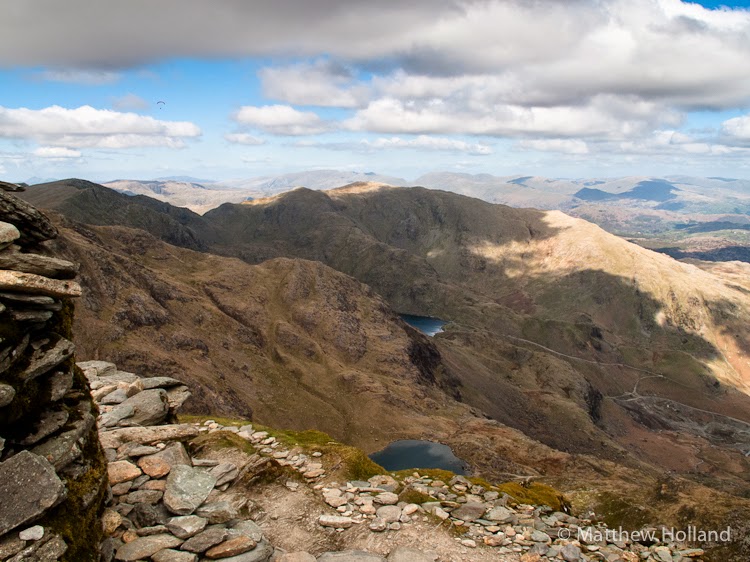 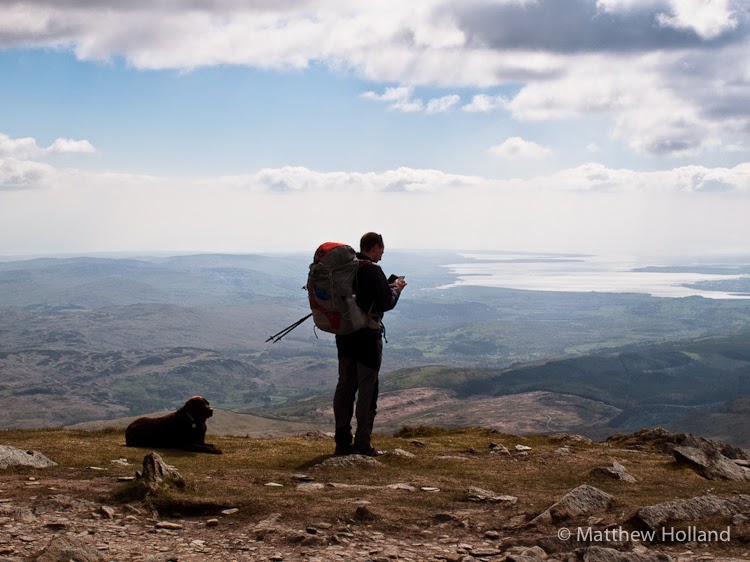 As we made our way along the tops a cool breeze started to blow, it was still pretty clear but there was certainly a bit of a chill in the air. From Swirl How we found the memorial to the Halifax Bomber that crashed on the side of Great Carrs in 1944. After exploring and taking a few photo's of the site we headed to Black Spout to top up our water supplies ready for camp. 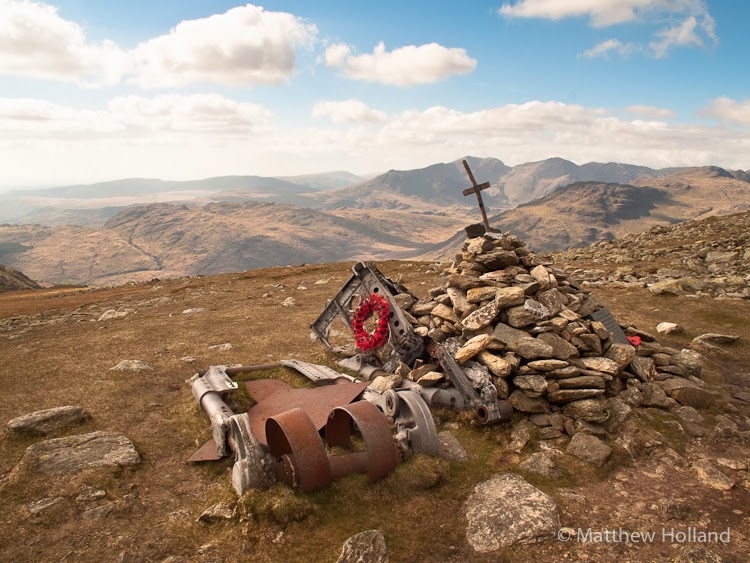 After collecting and filtering enough water to see us through the night we made our way over Grey Friar to find a suitable pitch for the night. The wind was still blowing and getting colder, thankfully we managed to find a pitch in a slight depression that got us out of the worst of the wind. Not long after we found our spot a chap and his two sons wandered past and stopped to say hello, they were out for the night as well and found a nice little pitch a hundred meters or so away from ours. He told us they were out for a couple of days and it was his lads first proper backpacking trip, great to see.

Camp on the first night 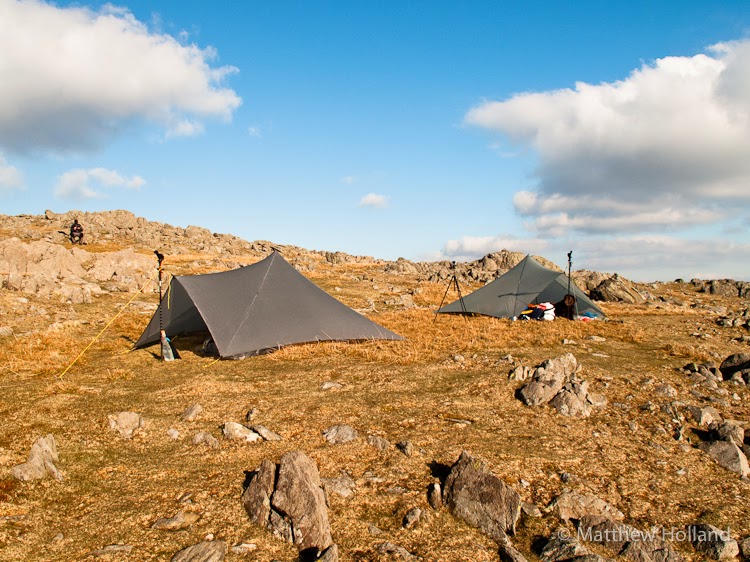 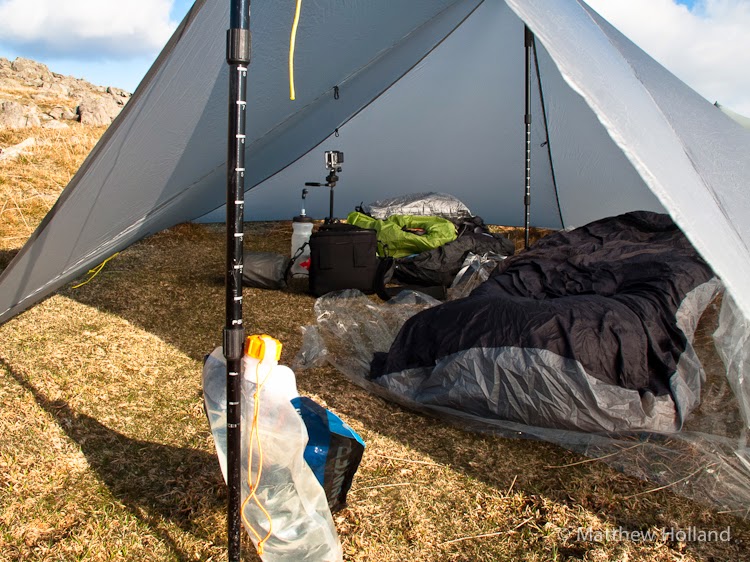 Once pitched we took a few photo's, had a good catch up, talked all things TGO and had a brew or two. About 7 o'clock I had something to eat (Mountain House) before taking a few more photo's and making a quick call home from the summit where I could just about get a signal. The wind was really blowing and taking any heat that was lingering with it, I think the last time I took a reading it was 0.8 °C with windchill, this was at about half 8 and my legs were starting to get a bit chilly so not long after I got in to my sleeping bag to warm up... the next thing I knew it was 1.30am and 10 seconds later I was fast asleep again sleeping until 6 am!

The view from bed 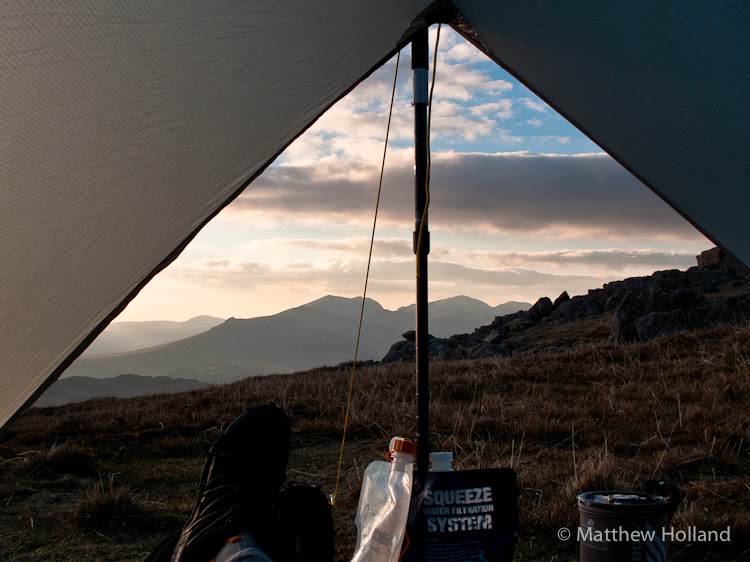 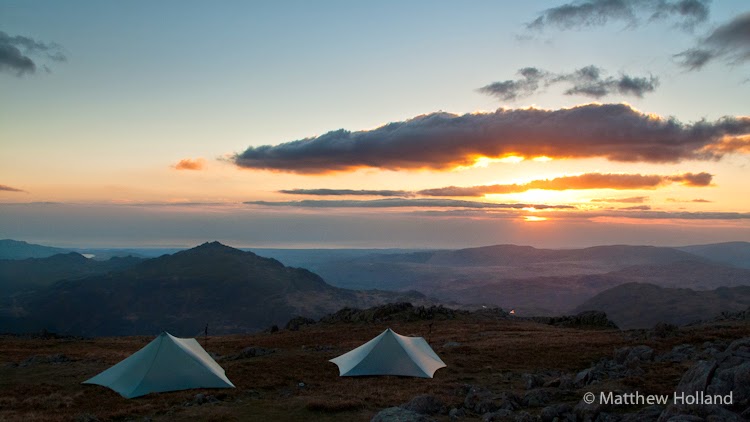 The sky was clear again in the morning but the wind was still blowing and it still felt cold, being so clear we both got straight up and wandered around taking photo's whilst the sun came up before returning to camp and having a nice warm brew and some breakfast. 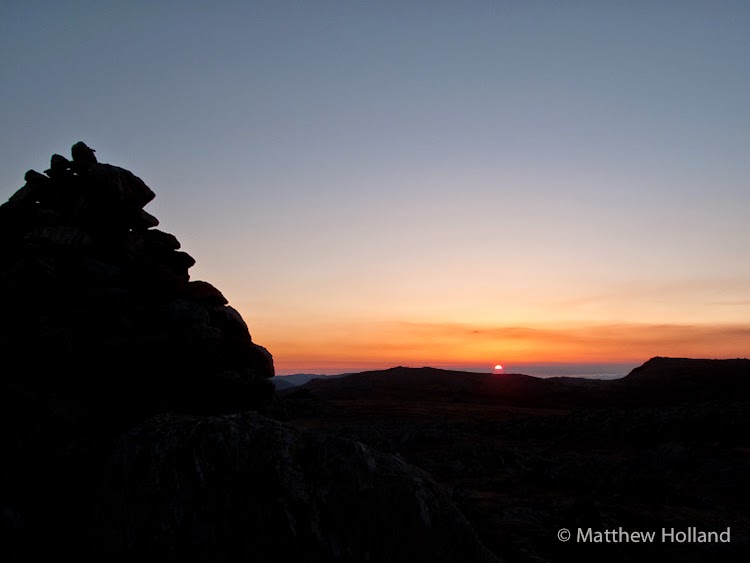 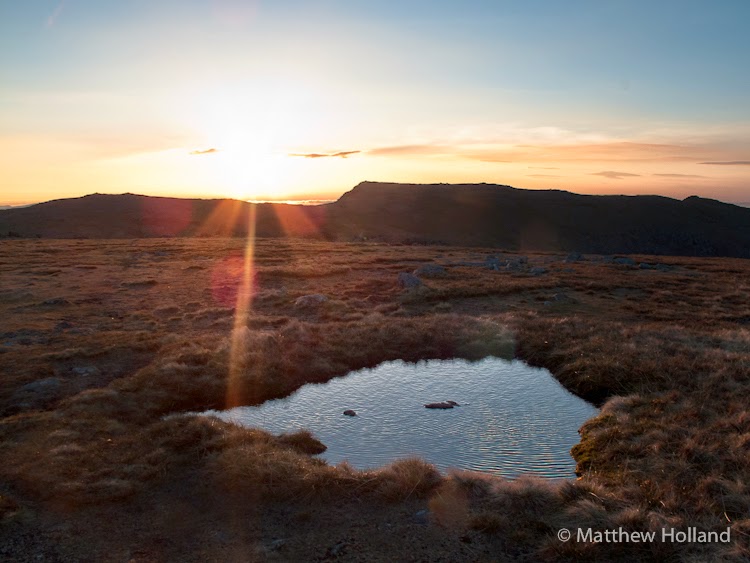 After breakfast we got packed up and headed East towards Great Carrs, it was a cold start to the day but I soon warmed up once we were on the move. From Great Carrs it was up to Swirl How, it'd clouded over by now giving us a the below view back towards Coniston Old Man. 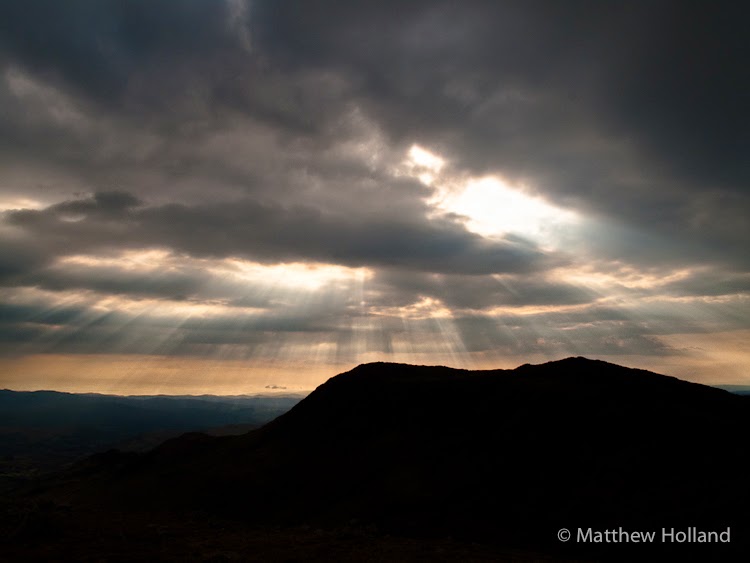 From Swirl How it was over to Wetherlam where I was shown the top secret location of the most perfectly level pitch in the whole of the Lake District ;-) even the grass was trimmed nice and short, definitely one to return to. From here we headed North East before turning South and wandering over 8 or 9 Birketts as we made our way back towards the Walna Scar Road. It started to rain as we made our way towards the fourth Birkett of the day (Haystacks) but nothing too bad and thankfully it didn't last too long. 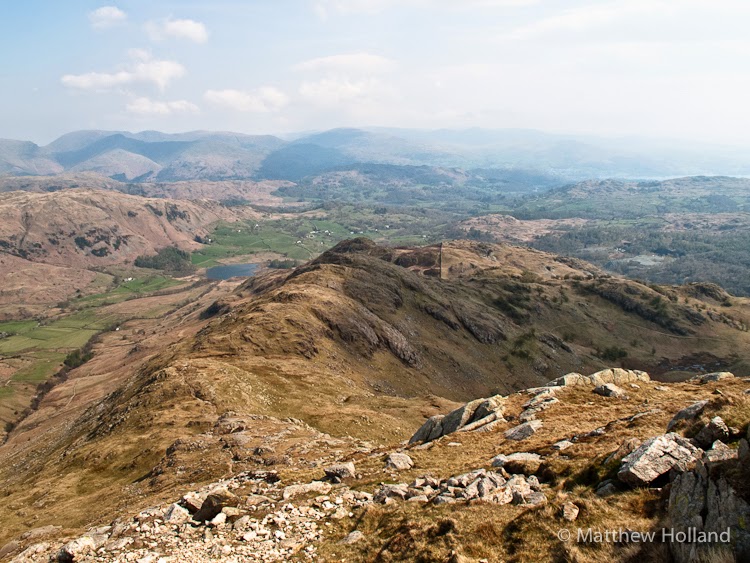 We'd initially planned to camp on White Maiden on the second night but with 60mph winds forecast and no a lot of shelter up there we decided to find a nice sheltered pitch lower down. It took us quite a while to find a nice level spot big enough for two Trailstars that wasn't covered in bracken but eventually we got pitched behind what must be one of the most windproof dry stone walls ever built. 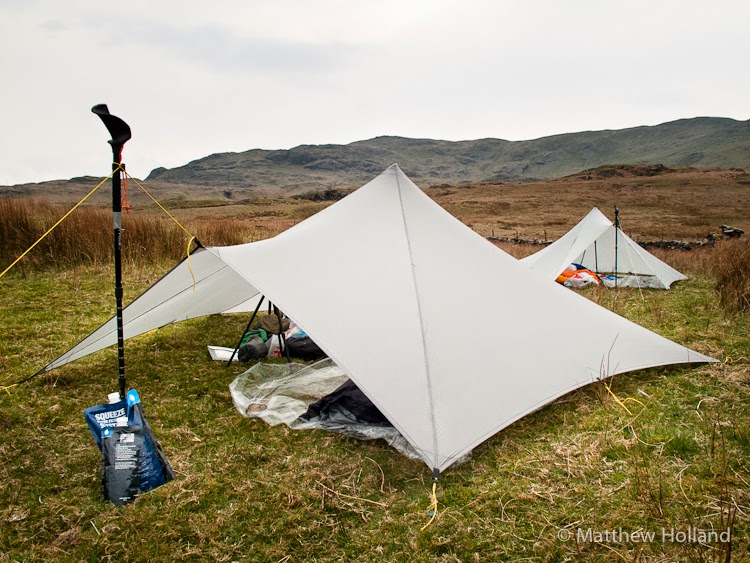 It was nice and warm sheltered from the wind behind the wall and we sat outside the shelters having a brew and something to eat. It was a nice relaxing evening, not much of a sunset but you can't have it all. I climbed in to bed about 8.30 and put a film on, however I don't even remember it starting and must have been fast asleep by 9pm! I sept like a log again waking around 5.30am as I usually do, it looked cloudy outside the Trailstar so I was in no rush to get up. Peter emerged from his Trailstar at about 6.30 and announced it wasn't a bad sunrise which promoted me to crawl from my sleeping bag and take a few photo's. 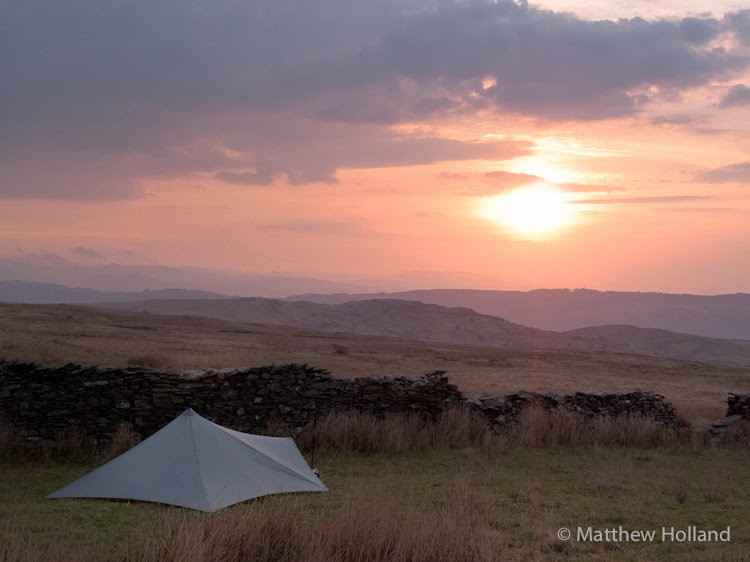 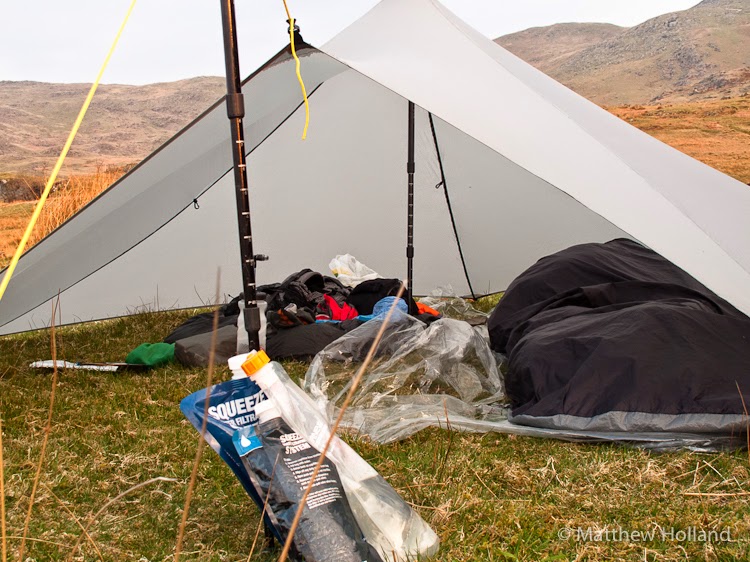 Day 3 started with a very short wander back towards Torver, followed by a superb breakfast at the Meadowdore cafe in Coniston and then home. I was expecting to get stuck in a lot of traffic on the way home given it was bank holiday Monday but the roads weren't too bad and I was home and unpacked in no time at all.

All in all a great few days in the Southern Fells, it was good to be out with Peter again and have another opportunity to pester him with questions to test his seemingly endless knowledge of the Lake District. Kit wise I took pretty much what I'll be taking on the TGO 11 days from now. There's probably going to be a few small changes as there always is but on the whole I was happy with the gear I took on this trip. 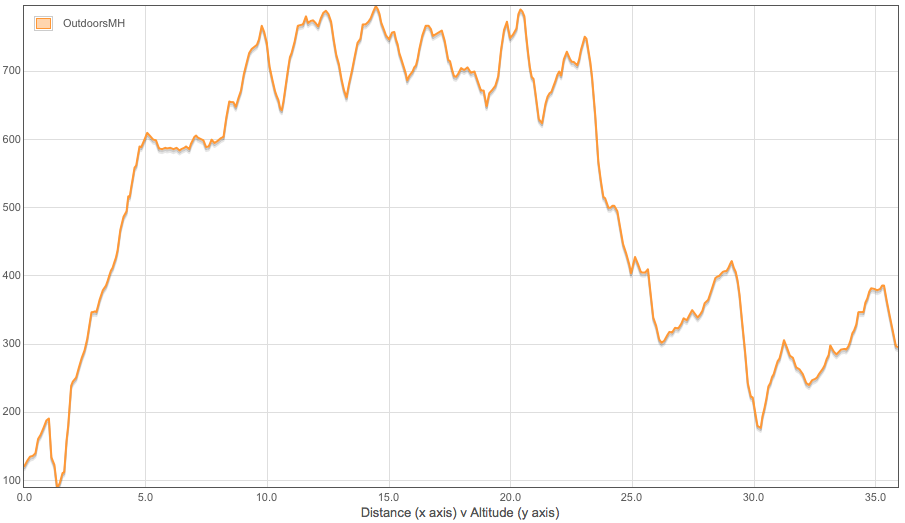