I've owned the Klymit Inertia X-Lite mat since around January but due to the extended cold weather at the start of the year I haven't had much chance to use it, as such this isn't a review, more of a quick look and some of my thoughts to date. 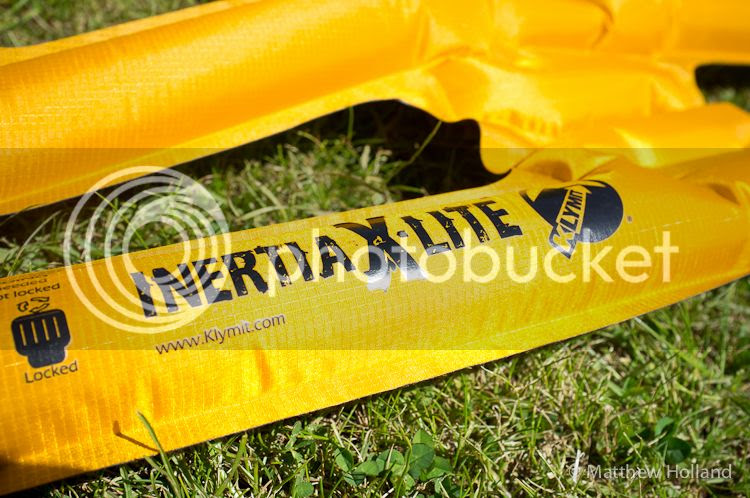 I should probably start by saying that I didn't buy this mat from new, I bought it used and well and truly broken. When I say used the mat hadn't actually been slept on but the sellers children had got hold of it and and punctured one of the beams, or at least that's the story I was given.

Once the mat arrived it appeared the damage was worse than I'd expected, one of the main beams of the mat had been completely ripped in two, albeit very neatly. From the description I was given I hadn't realised the damage was going to be quite as bad as it turned out to be but I knew I was buying a damaged item so hey-ho.

To repair the mat I used the same method as shown in Klymit's own video (link to youtube vid - opens in new window) regarding modifying/resealing their mats, It only took a couple of minutes and the mat has remained air tight since :-) The repair looks a little messy but that's mainly because I haven't got around to removing all the dried glue from the previous owners attempt at patching the mat. A few photo's:

Klymit describe the Inertia X-Lite as the world's lightest, most compact, and most technically advanced 3/4 length camping pad ever. Designed with body mapping technology it gives you support and comfort where you need it and not where you don’t.

It's certainly lightweight, coming in at 181g on my scales and the pack size is very small, It's a torso length mat, with the main pressure points from your hips, shoulders and head lying on each of the three main sections of the mat. It takes very little time or effort to inflate the mat, approx 2.5 breaths plus a few squeezes from the pump to firm it up to my liking.

One thing that I was surprised with is that the material feels far more robust than I thought it would, due to its weight I was expecting it to feel more delicate than it does and looking on Klymit's youtube page it seems these mats can take a bit of a beating (see bottom of page). In use the mat has made me realise I roll over quite a lot during the night, this has led to some discomfort when trying to sleep on my side as the frame just doesn't provide enough support for me when not laid on my back. I'll hang on to the mat through summer and see how I get on with it after a few more nights but due to the side sleeping issue I don't see this mat being a keeper for me.

As others have mentioned if you're a back sleeper then the Klymit Inertia X-Lite could be a good option for an UL mat, I'm just not sure it's going to be the right one for me, but time will tell.

As mentioned above this mat was purchased with my own hard earned pennies.