I'd originally planned to be in the Lake District when this day walk took place but for one reason or another I ended up having only a single day free to get out for a bit of a wander. Not wanting to use up half the day driving to the Lakes or up in to the Dales or North York Moors I decided on a circular walk closer to home, the Chalkland Way. 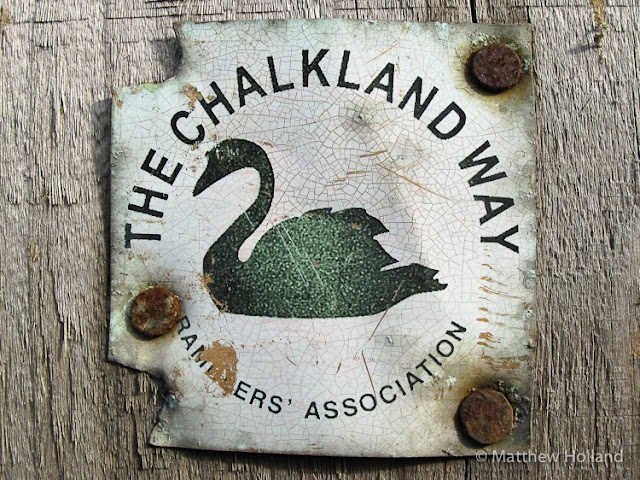 The Chalkland Way is a circa 70km circular walking route on the Yorkshire Wolds which is Britain's most northerly chalk outcrop. Using a number of existing paths (namely the Wolds Way and Minster Way) and a couple of road sections it links together the villages of Great Givendale, Bishop Wilton, Bugthorpe, Thixendale, Fimber, Wetwang and Huggate with most people choosing to start and end the walk from Pocklington.

Born in York and growing up in the small town of Pocklington I know the area well and have done quite a few walks on both the Minster and Wolds Way in the past. I must admit I wasn't aware of the Chalkland Way until fairly recently but after seeing it a couple of times on OS maps and a bit of internet searching I decided I'd give it a try some day. The 30th August was to be that day and with the weather forecast looking good I set off from a sleepy Pocklington at around 05:30 am. 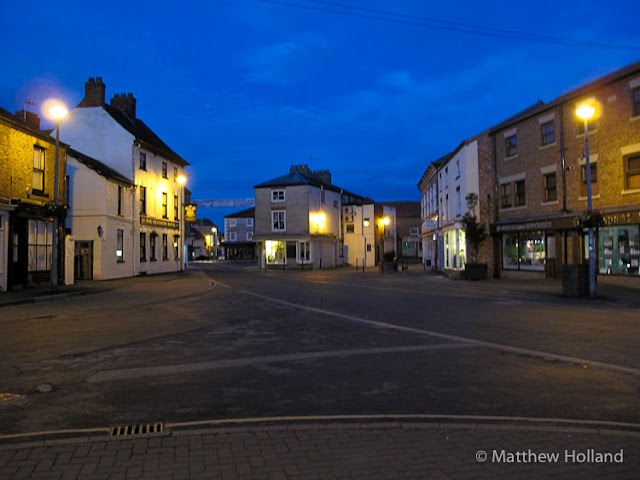 It was a nice cool morning and good to be out again, a friend of mine had very kindly loaned me a GoPro to try out (See bottom of page) so initially the pace was  very slow as I kept stopping to fiddle and have a play with the new toy and to take a few photo's of the sunrise. 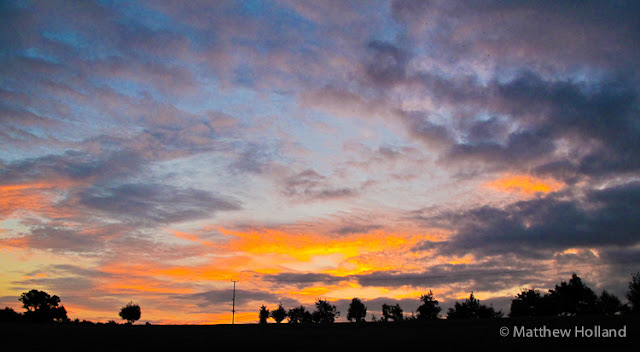 The first section of the route involves a short walk through Pocklington before leaving the roads and heading up and over Chapel Hill. There's a small wooded section here and as you leave the woods the footpath follows the edge of Kilnwick Percy Golf Club before heading back in to the woods and following a gravel track down and out in to farmland.

Onwards through the fields 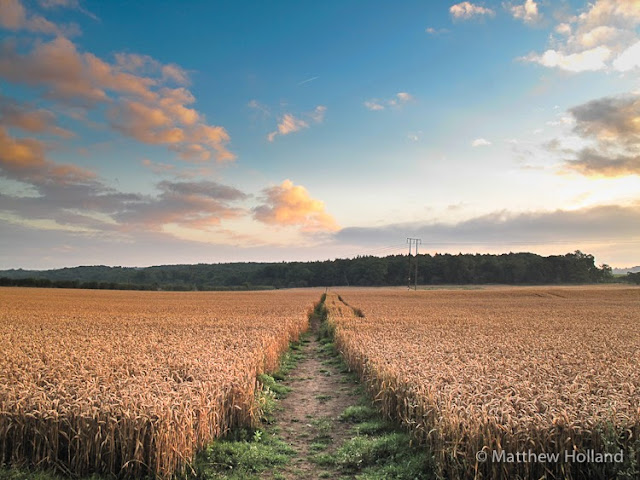 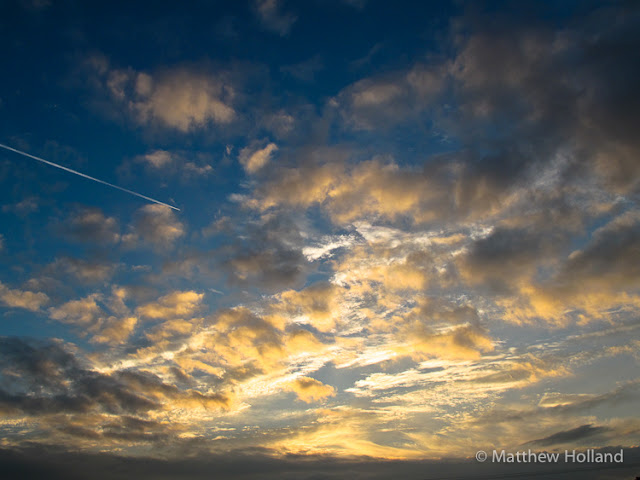 After crossing a couple of fields it was in to another short but more dense wooded section (Grimthorpe Wood) before emerging in to farmland once again and climbing upwards to Great Givendale. The small amount of height gained here allowed some nice views West across the extremely flat vale of York.

This kind of terrain continued throughout the day as the majority of the Chalkland Way involves walking through or alongside farmland with a couple of road sections and the occasional small wooded section. I guess I'd describe the scenery as pleasant rather than stunning, there're a few small ups and downs along the route as you make your way from dale to dale and the highest point of the walk is around 240m with a total height climbed of around 1210m. 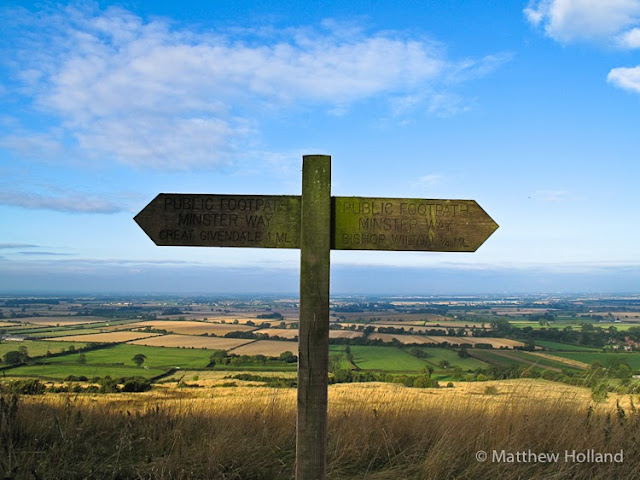 It didn't take long for me to realised I was getting nowhere fast and that fiddling with the GoPro would have to stop, if I was to get round this walk before I was back at work the following day I'd have to crack on and get a few miles under my feet, so the GoPro was popped back in my pack and I settled in to a nice steady pace.

Company for the day 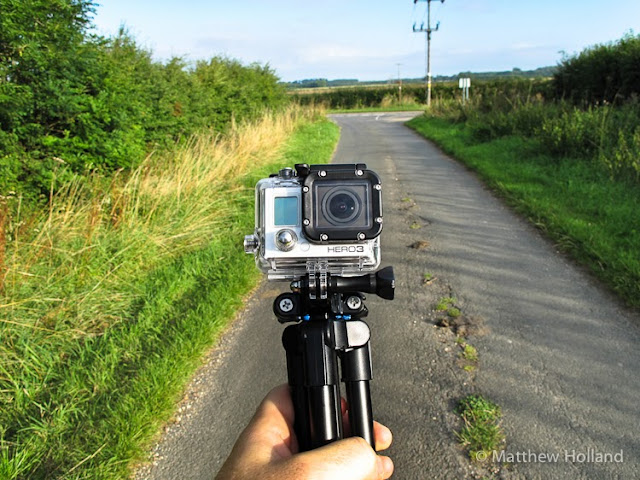 Once I'd upped the pace a bit It wasn't long before I reached the village of Bishop Wilton, there's a good little pub here which I've been to a few times in the past, unfortunately I was a bit  early and the pub was still closed so I carried on and headed towards Bugthorpe before turning East and making for Thixendale. 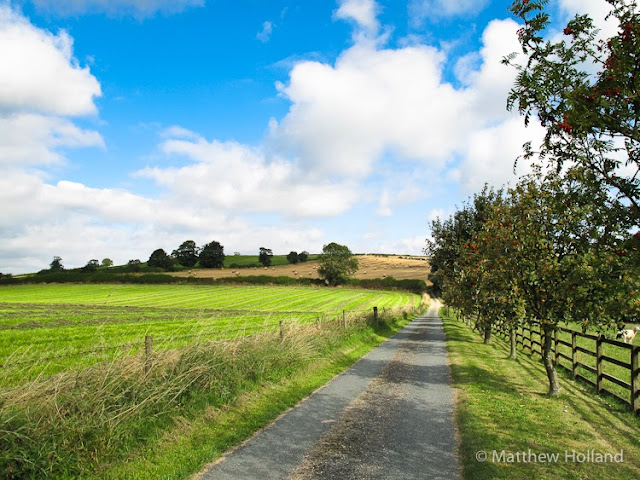 I made it to the small village of Thixendale at around mid day and popped in to the local shop, the lady behind the counter very kindly topped up my water supplies for me and after a quick chin wag and buying a couple of chocolate bars and an ice cream I found a nice little spot to sit and have some lunch.

Chalk path leading out of Thixendale 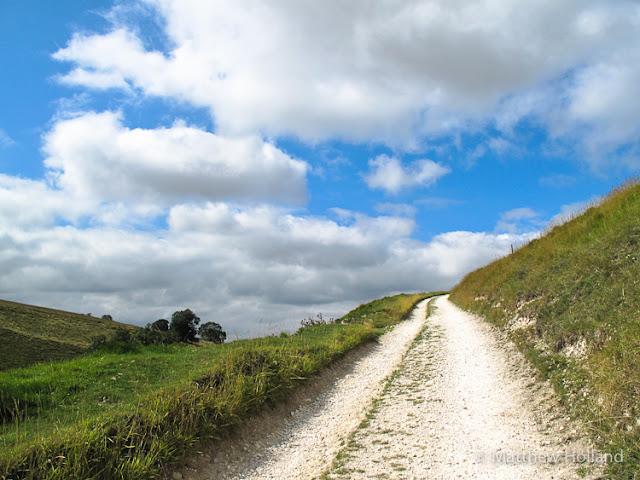 A chalk track leads you up and back out on to more farmland, the sun was out and the it was starting to heat up a little, harvest time was in full effect and I past quite a few combines during the day. 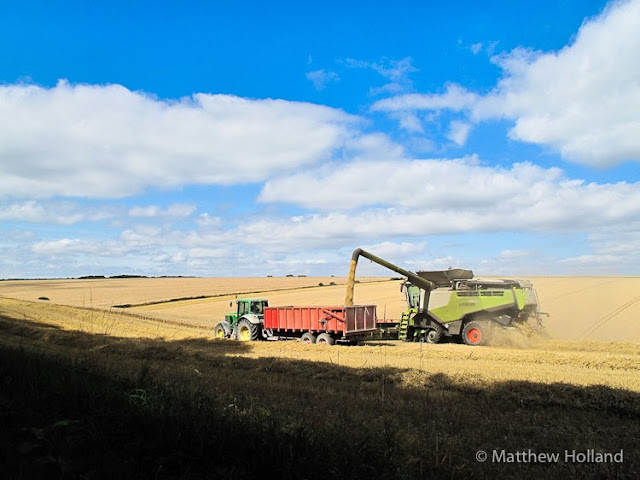 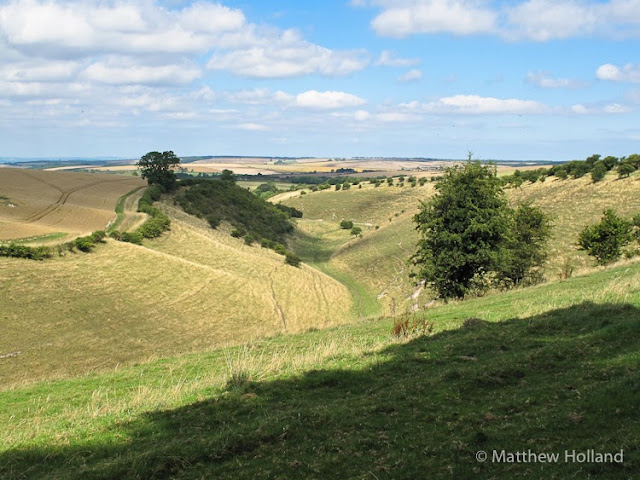 Once past Deep Dale came quite a long (4.5km ish) road section which I didn't particularly enjoy, the sun was out in full force which probably didn't help and it was the hottest part of the day. The GPX file I'd found for the walk suggests that the Chalkland Way does indeed follow the road here and the hard surface was starting to make my feet hurt. There's a disused railway line that runs almost next to the road and it would have been better if the path could have used this rather than the road, however it appeared to be too overgrown to walk on as well as a few sections which wouldn't have been passable where small bridges for the tracks once would have stood, a shame. 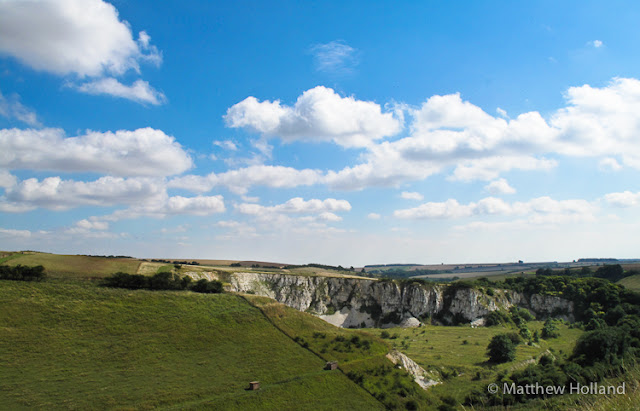 Once past Fimber the route heads back on to farmland, with the last km or so seemingly being claimed back by the farmers as there was no break in the crops to allow easy walking along the footpaths, only when I got to Wetwang did I find a sign that asked people to follow the edge of the fields I'd just walked across rather than the route of the actual path as marked on the map. 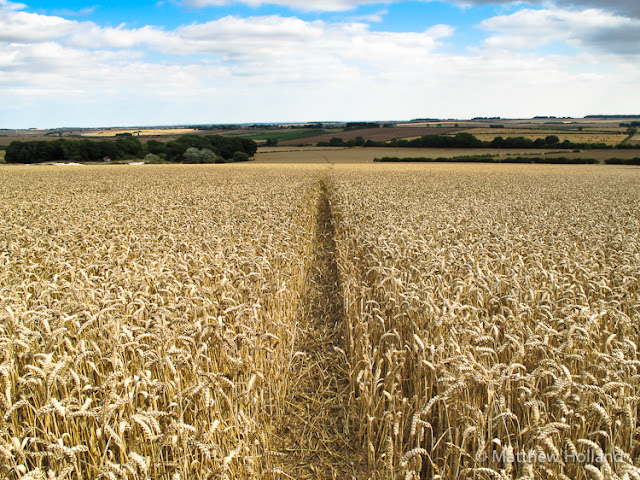 I was running low on water as I walked in to Wetwang but thankfully a lady at the garage topped up my bottles for me. I was starting to get a little tired from here and the next section of the walk through Thorn Dale towards Huggate felt like a bit of a slog across yet more crop fields, becoming slightly more interesting as I neared Huggate as it the path wound it's way through Shortlands Dale, Oxlands Dale and Cow Dale. Once past Huggate the path gains a little more height up to Greenwick before heading through a short wooded section and then making it's way through Tun Dale, Frendal Dale, Nettle Dale, past Millington Pastures, and on to Sylvan Dale (There's lots of Dales around here!). Shortly before Sylvan Dale there's a nice little bench where I decided to take my last rest stop of the day, the weather was starting to cool down and the wind was picking up but I sat there for some time watching the colour in the sky change as the sun set in the West. 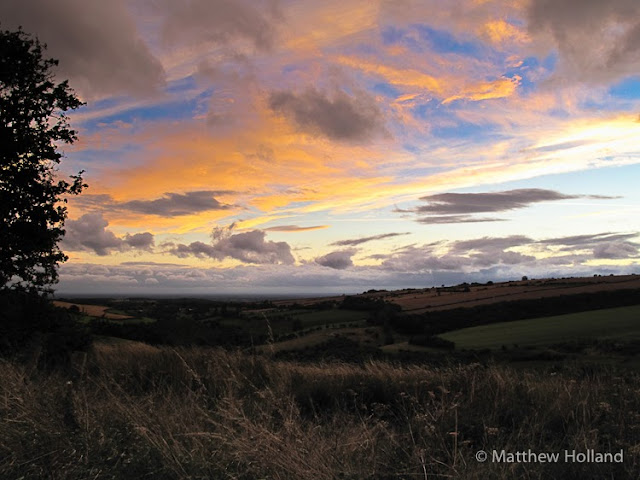 After my extended rest stop watching the sunset the rest of the walk was completed in the dark. I know this area well so no map work or route finding were necessary and I made my way down from Millington and across the golf course before descending back in to Pocklington to finish the walk.

Back in Pocklington at the end of a long day 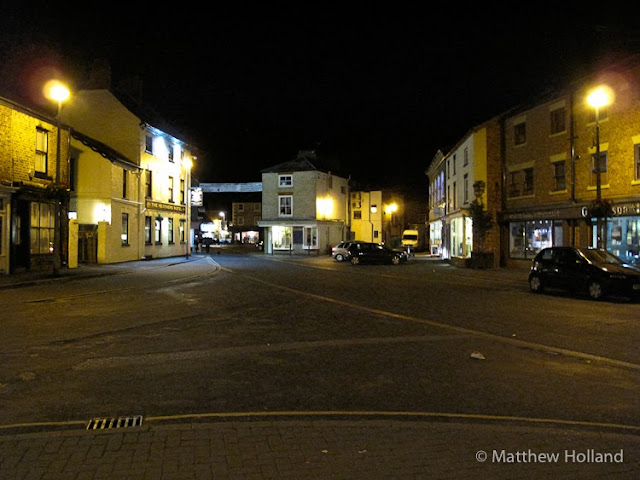 All in all it was a long but enjoyable day, my feet hurt by the end of it, no blisters or sore spots, just aching from the distance. As mentioned previously the scenery was pleasant rather than stunning but the weather was kind and it was good to link together a number of sections of walks I've done in the past. I took around 3 litres of water with me and just about managed with a refill at the shop in Thixendale and the kind people at a garage in Wetwang filling up my bottles for me, I'd advise others to maybe carry a little more as there are few opportunities to refill along the way.  It's not a walk I'll be rushing to repeat but it was good to be out and to make use of my only free day before returning to work the following day. 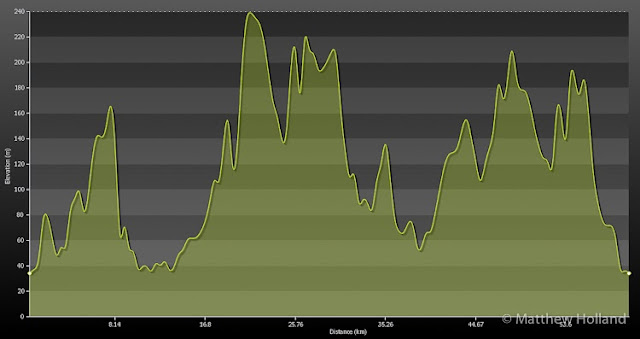 Messing with the GoPro