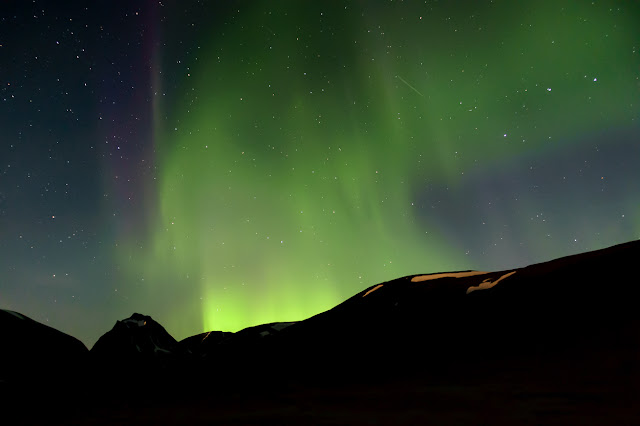 I've received a few messages asking about the cost of my recent trip backpacking in Northern Sweden. As such I thought I'd cobble something together giving a rough breakdown of the main costs, hopefully this might be useful to those considering a similar trip.

Scandinavia is some what renowned for being on the expensive side and whilst I'll never argue our trip was cheap, I think it's fair to say that for the experience I had it wasn't overly expensive. We visited Sweden during Aug/Sept 2017, the exchange rate at the time was approx 10.3 SEK to £1.

We (Lee) were surprisingly organised and booked our flights around 10 months in advance, flying from Manchester to Stockholm, then Stockholm to Kiruna, all our flights were with SAS. Our bags were checked all the way through to Kiruna and the Stockholm layover times were roughly two hours on the way out and just over four on the way home. £305 return.

From Kiruna Airport it's a short journey to the town itself. Peter was adamant we'd be fine walking it "as long as there isn't a big fence when we get to this bit here", we got a taxi, split between the three of us the price was roughly the same as a single bus ticket at approx £5. Overall cost £10 each inc the return trip back to the airport for departure. There is a big fence.


We chose to have a night in Kiruna on arrival and the same again before flying home. This decision was kind of dictated by our flight times so it may be possible to avoid this depending on when you arrive in Kiruna and how you intend to travel to your start point etc.

For our accommodation in Kiruna we stayed at the excellent SPiS hostel, again as there was three of us we split the cost and booked a private room, I'm not sure but if travelling solo this may be slightly cheaper for a single bed in a shared room. The cost per person for two nights was £61, this price didn't include breakfast. The hostel was very clean, the beds comfy, shared showers in the corridor on each floor, free wifi and located close to the bus stop/shops/pizza. The hostel offers a baggage storage facility. This isn't strictly necessary but we chose to store a bag their until our return. The cost of this was 50 SEK/night, around £13 each in total.


From Kiruna we got the bus to our start point at the Turiststation in Abisko. This took around an hour and cost £18 each. We also got the bus from our finishing point of Nikkaluokta back to Kiruna which took an hour and 20 minutes with the price being about the same, so £36 to get from Kiruna and back. Alternatively it's possible to get the train to Abisko but for some reason this didn't seem to be available when we were looking in to it so I'm not sure if it's any cheaper than the bus.


For insurance, 12 days cover for me came to £25.94. No doubt this could probably be found a little cheaper or people may well be covered through existing policies so you might be able to avoid this cost, I wasn't at the time so this is what I went with. The cover appeared pretty comprehensive, even including things like a helicopter evacuation should it have been necessary. Thankfully, it wasn't.

I've tried to include all the main expenditure in the above but obviously this doesn't include absolutely everything. The total of these main costs comes to around £450. Things missing which may need to be factored in include transport to and from the airport from home, food and drink for the days spent travelling, food for on the trail etc. I haven't included these here as they're entirely dependent on your choices/location etc.

We had a meal in Kiruna on the night we arrived and also on the night before flying home. We ate at the Pizzeria Palladium which served up really good pizza with all manner of toppings, it was also close to the hostel, from memory this cost around £10-£12 per person/meal. I haven't had an alcoholic drink for a good number of years now so can't comment on the cost of alcohol for those who like a drink.

The above total doesn't include the cost of all the food eaten whilst on trail. We took all our supplies with us from the UK for the full 9 days on trail. This was partly due to our route not passing many STF huts but also because we'd heard the supplies available are sometimes quite limited, and also (understandably) quite expensive. As our trip wasn't long after the Fjallraven Classic had taken place we weren't sure how much would be available in the couple of huts we were due to pass. As it turned out the two huts we did go in were quite well stocked. The photo's below show the price lists for the Vistasstuggan hut. Peter would probably advise you avoid the meatballs. 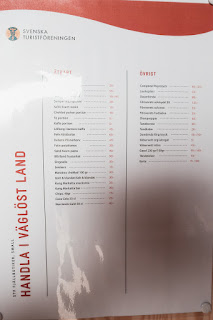 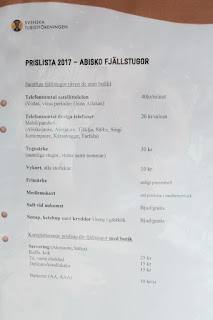 Hopefully this post will be of some use to those considering a similar trip. No doubt I've missed a few things but hopefully this covers all the main expenditure. I appreciate posting this before any sort of trip report is probably a little back to front but hopefully that'll be up soon as well. If there's something obvious I've missed or you have any other questions either comment below or drop me a message through the contact form and I'll try get back to you.

Also a huge thank you to Bongo, Geoff & Chrissie Crowther and Mark Waring for their help with route planning and general trip information :-)

Edit 26/7/17 - As we weren't planning to use or pass many of the STF huts we didn't sign up for their membership, as such we had to pay 150 SEK to use the facilities at the one hut we did visit. Day visits are free for STF members so this might be worth considering if you're planning to use the hut system and/or camp near them.